He took over his family business of period furniture manufacturing at the age of 17.

Inspired by the Bauhaus, he began developing his own collection of modernist furniture. His approach will be later developed by the Union des Artistes Modernes . This union will welcome designers such as Robert Mallet-Stevens, Pierre Chareau, Francis Jourdain, Charlotte Perriand…

He furthermore developed, all along his career, numerous patents and innovations such as the concept of “cloutage” (long lines of tiny brass nails on veneered wood panels)

André Sornay has long remained unknown as he spent his professional life working in Lyon rather than in Paris. 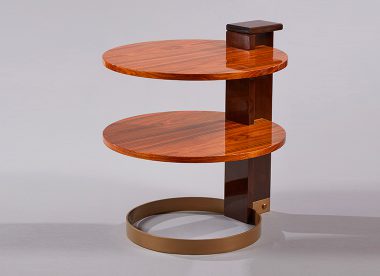